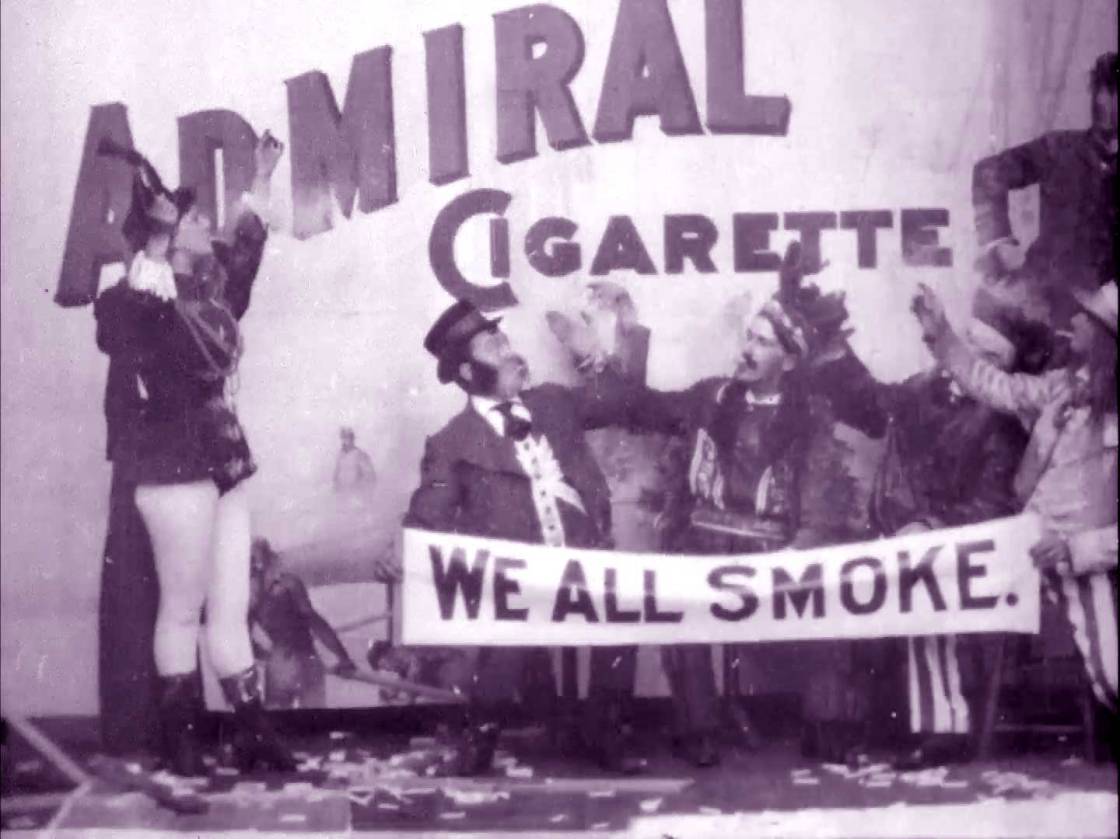 One of the earliest advertising films, this short does exactly what it says on the title: tries to convince the viewer to smoke Admiral Cigarettes. To do so, it employs the tried-and-true trick of many an ad before and since: a scantily-clad model.

Smoke ‘em if you got ‘em

Filmed ads came along almost as soon as films did. As with any part of early film history, the question of firsts is a complicated one but there is good reason to believe that Edison films promoting railways travel can be considered the earliest. Admiral Cigarette was among the first films to advertise a tangible consumer product.

The most amusing thing about this little ad is how little marketing has changed since 1897. A group made up of various national and cultural symbols (Uncle Sam, John Bull, a Native American in a headdress) sit together beside a giant box of Admiral cigarettes. The box bursts open and a smoking (and smoking) showgirl emerges, showers the men with cigarettes and they unfurl a banner declaring their devotion to the brand. Change the product and it’s the sort of thing we would see today.

The film is also an interesting early example of incorporating motion picture footage into an overall branding campaign. The pants-free admiral who emerges from the cigarette box was also used in print advertising for the Admiral brand. There were even small cards that allowed people to flip open the young lady’s cape to reveal her lace drawers underneath. It’s worth remembering that during this period in history, men were seen as the primary consumers of tobacco and marketing campaigns reflected that.

As you have probably noticed, the Admiral brand went in for splashy advertising and they had good reason to do so. In 1880, the cigarette rolling machine turned them into a cheap and convenient option. Mass produced cigarettes quickly became the favored way for tobacco to be consumed in the United States. By 1897, the American Tobacco Company was a juggernaut and had been one of the founding companies of the Dow Jones Industrial Average the previous year. It gobbled up older companies and became unofficially known as the Tobacco Trust.

All of this meant that a new company would need to work extra hard to capture the attention and money of nicotine-seeking consumers. The Admiral ad campaign did just that—and we’re not just talking about the ladies in their underoos. (Those seemed to have arrived later.)

An 1893 issue of Frank Harrison’s Shorthand Weekly discusses a complaint made about Admiral’s campaign. It seems that the ad featured the bold statement “Not made by a trust” rather than merely extolling the virtues of the product, which was seen as tacky in some corners.

Shorthand Weekly’s response is interesting as an early example of advertising and consumption as political statements:

“The average American citizen, among the class known as “the consumer,” also knows a little something about trusts and their arbitrary methods of throttling competition. And he usually has a tender feeling towards the under dog in a fight, especially if the upper dog shows signs of unfairness, and if he can do so without cost to himself he will favor the under dog. And here is where “Not made by a Trust”appeals to the consumer.

Advertising is designed to create comment. “Not made by a Trust” creates comment. I have repeatedly heard the call for “that cigarette that’s not made by a trust,” and usually a laugh and a discussion would follow.”

By the way, there’s a small editor’s note at the end of the piece that reads, “Furthermore this MAGAZINE is not chattel mortgaged to a Trust. I was amused to discover that a stenography trade magazine was so feisty in its attacks on monopolies and cartels.

If you want to know what happened to the Admiral brand, its owner, the National Cigarette and Tobacco Company, was acquired by Union Tobacco. Union Tobacco was absorbed by the American Tobacco Company—the “trust” and bête noir of Admiral’s ads—in 1899 and that was that.

It’s too late to make a long story short but this background shows by the Admiral brand was eager to jump into the newest and splashiest way to advertise one’s business in the 1890s. Showgirls and nitrate film it was!

Projected films were still new enough to be a novelty and in his essay on the film, Scott Simmon states that projectionist and future director Edwin S. Porter offered a free outdoor rooftop screening of advertising films. Perhaps Admiral Cigarette was among them? According to The Phonoscope:

“A very interesting and novel advertising exhibition is now being given on the roof of the building at 1321 Broadway, facing Herald Square. Animated films are shown illustrating advertisements. The pictures were all made by the International Film Co., 44 Broad Street, and are attracting the attention nightly of thousands of people. As an instance of the enterprise and hustle of the International Film Co., the Democratic Mayor was nominated on Thursday night and on Friday his picture was on the screen at 34th Street.”

Ads quickly lost their appeal for most viewers (I would personally murder anyone who projected video ads into my neighborhood) but they continue to be a major part of the filmgoing experience down to this day. Seeing the Admiral ad reminds us all that the more things change…

Released on DVD as part of the out-of-print More Treasures from American Film Archives box set. It has now been made available online for free and legal streaming and downloading courtesy of the Library of Congress. It doesn’t get much better than that.