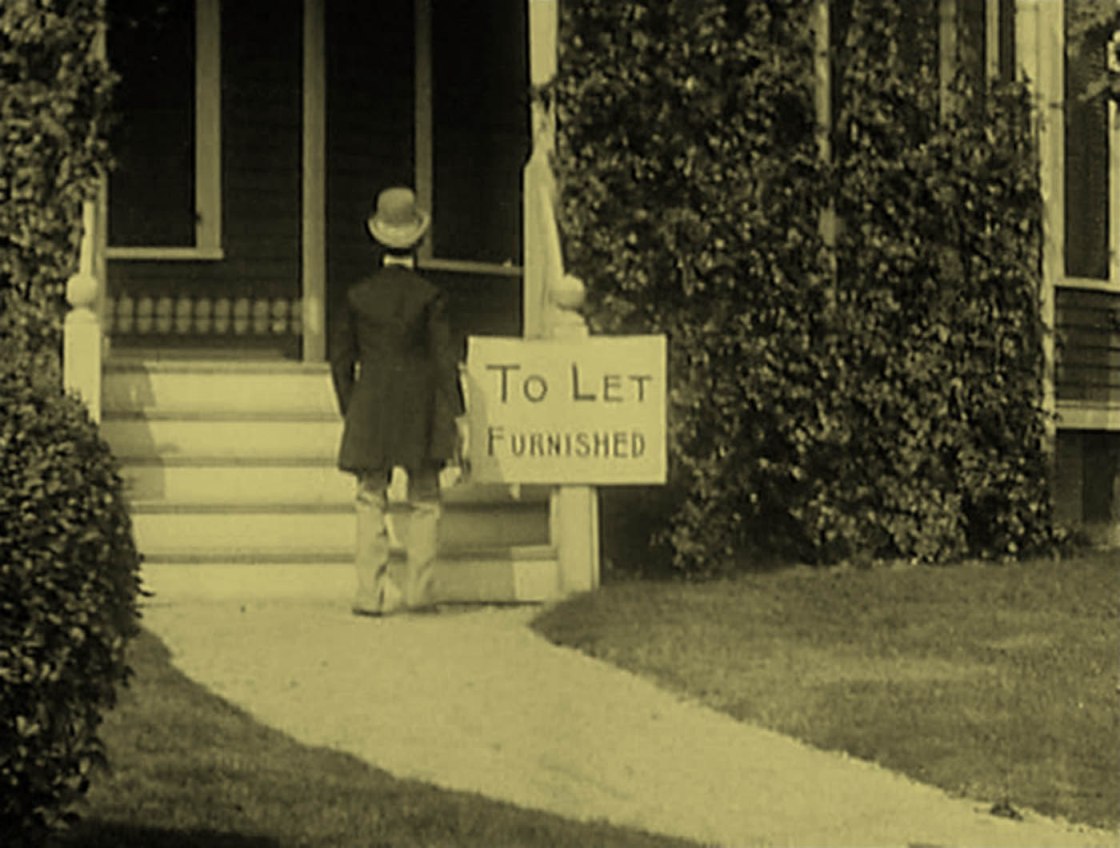 The Suburbanite (1904) A Silent Film Review

A family of New Yorkers move to the suburbs hoping for some peace and quiet but they soon discover that their new neighborhood has its own challenges.

I once again find myself in the strange position of being topical. At the time of this writing, the death of New York City or a disagreement with same are the subjects du jour, heaven help us all.

I can’t really comment on the situation in New York today but I can talk about what was happening in 1904 when The Suburbanite was shot by the Biograph film company. Obviously, suburban living really exploded in the United States post-WWII and it’s a story of segregation and white flight but this is a bit of the pre-history of the move to the ‘burbs.

It is doubtful that Biograph filmmaker Wallace McCutcheon meant to examine anything as deep or disturbing as that. In fact, The Suburbanite is an early entry in the “relocation from hell” comedy genre, think Mr. Blandings Builds His Dream House and The Money Pit. There is no overarching plot, just a series of vignettes strung together with a general “the suburbs are awful, man” theme over the course of a single reel.

The film opens hopefully enough. A respectable New York couple and their multitude of children have relocated to the unnamed suburbs. (The exteriors were shot on location in Asbury Park, New Jersey.) They have an attractive home in a peaceful neighborhood. What could possibly go wrong?

The moving-in scene is probably the strongest in the picture with the horse-drawn wagon pulling up to the curb, carefully turning so that the opening faces the house… and dropping the contents onto the sidewalk. The New Yorkers respond to this with horrified shouts, the battle escalates and soon the mild-mannered husband is lobbing picture frames and the movers.

Things go from bad to worse when the wife puts the boys out to play with nutritious snacks only to find them playing in (and possibly eating) the mud.

And, of course, the bane of every suburbanite with a city job: the commute to the city. Our poor city fellow just misses his train to work and ends up flat on his face in the railway station.

The final straw comes with their latest domestic hire. (Remember, a live-in cook/housekeeper was considered within the means of a middle class family at this time.) Portrayed as a stereotype of an Irishwoman, the new cook takes an immediate dislike to her mistress’s mother and sets about smashing all the crockery in the kitchen that is not either nailed down or painted on. The scene ends with the violent chef being led away by the police but our hapless New Yorkers have had enough and rent the house out.

I would be willing to surmise that perhaps, just perhaps, someone who worked at Biograph had just experienced an unsuccessful relocation to the suburbs.

It’s worth noting that intertitles (sometimes called “subtitles” during the silent era) were relatively new to American films at this time. Narration was popular, as were short vignettes from plays and novels that were so popular at the time that no text or context would have been necessary to enjoy them. (For comparisons, consider how most modern viewers could see a scene with a burly Teutonic actor saying “I’ll be back” and immediately understand what was being conveyed.) Intertitles offered films a chance to weave their own independent, complex narrative, one that did not rely on either pop culture references or the skill of the narrator.

(If you want an example of how spoken narration worked with silent films, several narration scripts survive for Georges Méliès productions, including A Trip to the Moon and The Kingdom of the Fairies.)

So, remembering where we are in the history of film, The Suburbanite moves along smoothly with those new-fangled intertitles. While there are no fireworks on par with such early films as, say, The Sick Kitten or The Big Swallow, the picture is edited well and there are some nice pans, courtesy of cinematographer A.E. Weed, that showcase the family’s doomed move.

Movies in the mid-1900s embraced both extreme realism and extreme artifice, enjoying both magicians traveling in outer space and families battling a moving van on a dirt road. It’s not so very different from today with our lavish superhero fare and our gritty human stories. And they would even combine the two in the same film, which is… (Makes vague gestures at the Joker and the Oscars.)

With this context in mind, the use of realistic outdoor scenes shot on location in New Jersey and the interior scenes shot in Biograph’s New York studio—complete with pots and pans painted onto the walls of the kitchen and an ersatz dining room window—makes The Suburbanite pretty much par for the 1904 course. Such scenes would be no more strange to audiences than in-hindsight dodgy CGI is to us today. (You can see similar stitching together of the real and the artificial in Lubin’s The Bold Bank Robbery released the same year.)

Finding humor and warmth in domestic situations had been an element of movies since the beginning. (Showing the antics and tantrums of the littlest Lumières had been early hits for the Lumière film company.) Audiences like to be dazzled but they also like movies that affectionately and humorously show them the familiar. In this way, The Suburbanite is a logical successor to the home movies of the Lumières and can be seen as one of the building blocks of the domestic comedies that would follow.

Watching the sad sack leads of The Suburbanite slowly understand that their dreams of bliss in suburbia are dashed is an amusing diversion and it’s easy to see why we are still making films and television shows about everyday frustrations over a century later. Missed trains, smashed deliveries and kids eating dirt remain relatable staples of situation comedy and The Suburbanite is a chance to see the genre being built from the ground up.

The Suburbanite was released on DVD as part of the More Treasures from American Film Archives box set. That box is now out of print but the film is easy enough to find online. (I do not share links to resources that are not either archives or known collectors.)