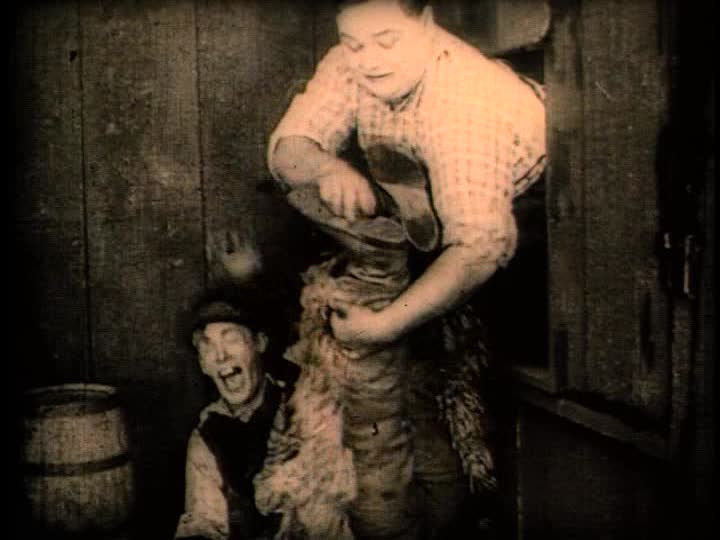 Readers of 1925 Debate the Merits of Rudolph Valentino, Ramon Novarro and an Arbuckle Comeback

What is most interesting about fan magazines is how they are divided between forgotten topics and questions that are hotly debate among silent film fans to this day. A 1925 issue of Photoplay printed some reader opinions and they are particularly interesting so I thought I would share them.

A while back, in response to a general interest publication reprinting the accusations against Roscoe “Fatty” Arbuckle without also mentioning that he was acquitted and afforded an apology by the jury, I wrote a little piece. While the response was generally positive, I did get a few “Yeah, but” comments in the mix. Sigh.

(If you want a breakdown of the scandal that shows proper sympathy to Mr. Arbuckle, here is a good article from Smithsonian Magazine.)

I was encouraged to see this call for Arbuckle’s return to the screen just a few years after his banishment.

(Letters in regular type. My comments in italics.)

If Peggy, Why Not Roscoe?

It is announced that Peggy Joyce is going into pictures. I have no desire to stop her nor curiosity to see her.

But if this woman who has never been seen on the screen, whose performances on the stage and off have never been illustrious, and who was barred from pictures two years ago because she has been involved in so many scandals, can now become a film star, what good reason is there for any further suppression of the clean, joyous pictures of Roscoe Arbuckle?

His fame as a creator of wholesome and refreshing comedies is world wide. His films are said to have made him a member of the Chinese hierarchy, while in this country, in a popularity contest in 1922, he received more votes than Douglas Fairbanks, John Barrymore, Harold Lloyd, Eugene O’Brien, Wm. S. Hart and others.

With every vaudeville theater in which Roscoe Arbuckle now appears crowded to the doors with friendly throngs, it is the height of absurdity for anyone to say that the public doesn’t want him.

If it’s any consolation to M. E. K., Peggy Joyce didn’t last in the movies, though it seemed unnecessary to throw her under the bus in order to defend Arbuckle. However, it is additional proof that Arbuckle’s ill-treatment by Hollywood was noticed by the general public.

Valentino returned to the screen in 1925 after an absence due to contract disputes. The vehicle, Monsieur Beaucaire, was an elaborate rococo affair and there were some digs at Valentino in lace and a powdered wig. Considering the popularity of the period and the fact that other stars had donned similar costumes with nary a peep, it does seem clear he was being singled out. His fans weren’t having it.

Since seeing Rudolph Valentino in Monsieur Beaucaire, I am more fervently than ever his admirer. He is now more than a mere heart-thrilling sheik. He has become a personage. Men laugh at us women for loving “Rudy,” but it always sounds like “sour grapes” to me.

You may as well put away your little hammers. Rudy is back and we shall see that he stays. Don’t worry about his losing his fascination for women. We are all at the feet of the graceful, sparkling, appealing “Beaucaire.”

He is not “trying to act.” He is doing subtle and compelling acting. No other person on the screen except John Barrymore is capable of even one of the clever and expressive gestures with which Valentino conveys so much.

However, there’s always one:

Still people flock to see Valentino. I suppose it is because he is a good dancer. And because he was one of the first of his type on the screen. He is my idea of nothing at all. Just to see him on the screen irritates me. He certainly can’t act. His face is practically expressionless.

Yet Shirley continues to attend his films, apparently. Singular.

And, finally, someone addressing the sheik in the room:

Why the endless discussion of the respective merits of Rudolph Valentino and Ramon Novarro? Why not let me end it by the order of seniority? Valentino is the king of sheiks and Novarro is the prince.

Speaking of Novarro, he had just been chosen to replace George Walsh as the title character of the mega-epic being filmed in Italy. Again, the readers had opinions. Weird, weird opinions.

(You can read my huge review of the film here, I detail the recasting.)

The substitution of Ramon Novarro for George Walsh in the title role of ” Ben Hur” is a piece of colossal stupidity on the part of Metro-Goldwyn-Mayer.

Mr. Walsh is, in every respect, suited to the role. He is the only actor on the screen who possesses the almost superhuman strength and muscularity that belonged to the Ben Hur of Lew Wallace’s novel. That he is sufficiently handsome no one will deny. As for the acting, Ben Hur does not make great demands on an actor. It is, after all, a straight “hero” part, and falls easily within the scope of Mr Walsh’s powers.

(I love that she doesn’t even attempt to defend Walsh as an actor, which strikes me as a bit strange when one is advocating for his reinstatement in a role. Also, methinks our correspondent saw photos of some of Walsh’s “artistic” poses. Nudge nudge, wink wink.)

Now let us look at Mr. Novarro. A stripling as Ben Hur. His physique is absurdly inadequate for the hero of the slave galley and the chariot race. He is of barely medium height, his face is delicate and boyish, his personality is anything but virile — in short Mr. Novarro is, in every detail, the exact opposite of Ben Hur.

Unless Photoplay has misinformed its readers, Mr. Walsh has been treated dishonorably. I wish I could convince him that he has lost nothing in public esteem, through this action of his employers; and I wish I could make him know how many there are who still believe that Miss Mathis’ faith in him, and our faith in him, will yet be justified.

Walsh’s treatment by MGM was pretty bad but I think we can all be grateful that Iris did not have access to Twitter.

It will be a crime against filmdom and the memory of Gen. Lew Wallace if Ramon Novarro is allowed to play Ben Hur.

As an artist and a movie fan I protest.

The Wallace Ben Hur was a young blond giant. The very nature of the tasks to be performed demands a man of magnificent physique…

…Believe me, and I say it with deepest sincerity, I cannot visualize Novarro struggling to fit his small feet into the huge sandals of Ben Hur and straining his slender shoulders with the weight of the play.

Stocking socks it to them, eh? Also, this fixation with blondness in heroes from a decidedly un-blond region is quite telling. I am also quite curious as to how Stocking knew about Novarro’s shoe size. Perhaps a vested interest? (I will keep making remarks about Stocking’s surname for the foreseeable future, thank you very much.)

In any case, I think Novarro was a splendid Ben Hur. As a performer, his greatest asset was the ability to act in epics with fancy costumes and huge sets but never once get swallowed up by them. This is an underrated ability and a rare one.