Pioneering animator Lotte Reiniger takes on one of the world’s most famous fairytales and makes it her own with her signature silhouette animation technique.

I also am reviewing Reiniger’s 1954 animated version of the same story. Click here to skip to the talkie.

Lotte Reiniger could do more with scissors and cardboard than some animators could do with an entire army of underlings drawing madly for them. She is famous for her silhouette animation—exactly what it says on the tin—and her 1926 feature film The Adventures of Prince Achmed is easily her best-known film but today we’re going to be heading a little further back in her career.

Released in 1922, just a year before Reiniger began work on her Arabian Nights epic, Cinderella is a 12-minute silhouette confection filled with all the humor and deft animation that Reiniger fans can expect. The version of the film that I saw does not have the original German intertitles. However, the English title cards were designed by Reiniger herself, so we can be sure that they had the director’s approval. Oh, and they are lovely! Take a peek:

Note how the cards also remind us of the scissors Reiniger used to fashion her delightful creations. It was not unusual for silent era animation to make the manufacture of the cartoon part of the story itself. For example, Humorous Phases of Funny Faces (1906) is a chalkboard animation that shows the hand of the artist at the beginning. Max Fleischer’s delightful Out of the Inkwell series makes the animated Ko-Ko interacting with the “real” world a central feature. Winsor McCay made the challenges of animation the entire plot of his Dream of a Rarebit Fiend.

In the case of Cinderella, we see a hand snipping out a silhouette figure from cardboard before we are thrown into the story. Once again, the creator shows her skills before immersing us in her world.

I think that most readers will be familiar with the story of Cinderella, though there are numerous variations of the tale. Reiniger, as would be expected, goes for the German Brothers Grimm version with the fairy godmother replaced by a magical tree and the wicked stepmother who forces our heroine to search for lentils in ashes because she is just that awful. This version also includes a plot element that is often omitted in adaptations aimed at children: one step-sister cuts off part of her foot in order to fit into the slipper and the shoe fills with blood.

Yep, it’s all there, blood and all. Reiniger does spare the second sister as the prince realizes that these chicks are nuts and prevents her from slicing off part of her foot in imitation of her sibling. We are never told exactly how unique Cinderella’s shoe size is and whether such small feet would interfere with her balance. In any case, it seems to be a rather slipshod way of finding a wife. Why can’t he just marry his cousin-aunt one country over like all the other princes?

The story ends with the stepmother so angered by Cinderella’s success that she quite literally rips herself in two. This isn’t quite as macabre as birds plucking out the eyes of the stepsisters—or is it?

I have to say that I am pleased that Reiniger gave the prince a little more personality than most versions of the tale. He chases his mystery woman from the ball and all the way to the enchanted tree and he would surely have caught up if the magic hadn’t reached its expiration date and rendered Cinderella unrecognizable.

In fact, Reiniger’s great strength as an animator is her inclusion of delicate little motions that imbue her creations with life. At the grand finale, the prince lifts Cinderella in the air and her feet flutter. The king and queen sway to the music at the ball. It’s these tiny moments that mark Reiniger as a master of her craft.

The film also includes the sort of cheeky humor that fans of Weimar cinema can appreciate. While preparing for the ball, Cinderella helps her step-sisters make themselves beautiful. The stout sister is corseted and the skinny one has everything but the kitchen sink stuffed down her top. It’s pretty cute.

Cinderella is not as elaborate or as long as Prince Achmed, of course, but it is a completely charming (and dark!) take on a fairy tale classic. Most highly recommended.

The version I saw was released on DVD as part of the Lotte Reiniger: The Fairy Tale Films set. This set is region 2 and will not play in standard region 1 players. (I purchased an inexpensive external DVD drive and set it to region 2, works like a charm and is an affordable solution.) The set also includes the 1954 version. 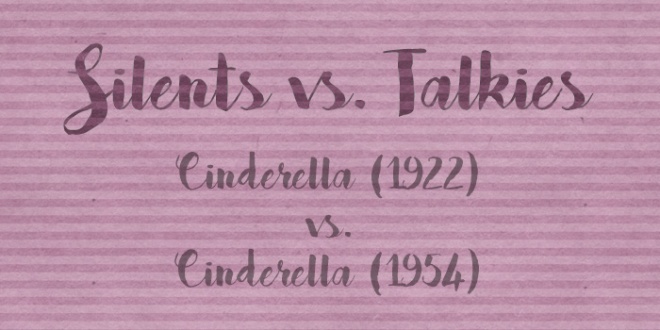 You can’t keep a good animator down and Lotte Reiniger continued making her silhouette creations into the sound era and beyond. Fairy tales were her specialty and so it made perfect sense to revisit that most famous fairy tale, Cinderella.

This time, Reiniger discards the Grimms in favor of Perrault and we are given a fairy godmother, pumpkin coach and mouse footmen, the whole shebang. There is also 100% less blood as the sisters never have an opportunity to cut off their feet.

As a nod to sound, this version includes narration and some voice acting, particularly for the wicked step-sisters. I have to say, though, that it seems superfluous. Reiniger does such a beautiful job with pantomime that it seems coarse to add voice over it.

The animation is smoother and more elaborate, the backgrounds more detailed. While it is beautiful, I keep being reminded of a line from The Neverending Story. A grumpy bookseller looks at the young hero with contempt and declares: “Your books are safe.” That’s how I feel about this version of Cinderella. The heroine is inconvenienced by her family but there isn’t much sense of peril and there is certainly no slicing of feet. This Cinderella is safe.

Your mileage will obviously vary on this score but give me the messy, bloody, unexpected Brothers Grimm over Walt Disney World any day of the week.

(By the way, if you haven’t read Michael Ende’s original novel version of The Neverending Story, drop everything and run, do not walk, to your nearest bookseller. You’ll be in the mood for German fantasy anyway after reading this review, at least I hope you’ll be.)

And the winner is…