Behind the Screen (1916) A Silent Film Review

Charlie Chaplin, Edna Purviance and company have a grand time in this behind-the-scenes spoof of slapstick comedy. There’s a mad bit of business with a trap door, a gang of arsonists try to blow up the studio and we get a rarity of rarities: a real pie fight!

By 1916, Charlie Chaplin had been making movies for two years and his meteoric rise was continuing unabated. He had started out working for Mack Sennett but a desire for better pay and more creative control motivated him to sign on with Essanay. Chaplin’s stay at Essanay was brief (the outfit did him dirty) but it did help build his brand and following.

The next studio to come calling was Mutual and Chaplin would later describe his time there as the happiest of his career. Given complete creative control, Chaplin flourished and began to perfect his trademark blend of slapstick and tears.

Charlie Chaplin was not the sort to forgive and forget (read his memoirs if you don’t believe me) and he had a few choice thoughts about the conditions at Sennett’s lot. Why not make a behind-the-scenes film to poke fun at how the sausages were made at other studios?

The plot is as spare as can be: Edna Purviance (in a very Mabel Normand-like getup) wants to break into the movies but she is immediately rejected. Meanwhile, Charlie is a stagehand who is constantly terrorized by his bullying boss (Eric Campbell, of course). Our hero manages to nearly ruin several productions with his klutziness but he is the only worker to stay when the others go on strike. Instead of being grateful, Campbell is more overbearing than ever.

Meanwhile, Purviance has disguised herself as a laborer and sneaks onto the sets. Chaplin discovers her, realizes her true identity and a romance is born. But before things can get too mushy, Chaplin starts a pie fight with Campbell, the striking workers attempt to blow up the studio and Purviance attacks them with a hammer. (I rather enjoyed that bit.) A chaotic climax that was designed to be the Sennett style exaggerated. 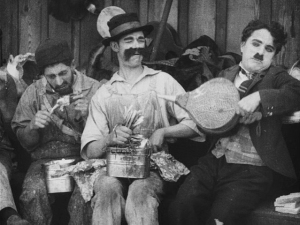 Edna Purviance is her usual game self, Eric Campbell is suitably bullying and Albert Austin as his usual quirky self as another stagehand. Chaplin, though, remains the biggest draw. (Excuse me whilst I put on my fangirl hat.) When I watch one of his films, I am constantly surprised by how magical he is on the screen. I know intellectually that he is an accomplished comedian and a graceful performer but when he starts his routine, there’s always this little jolt of discovery, this connection that makes the years fall away. Behind the Screen is a century old as of this writing but Chaplin is as fresh and funny as ever.

I personally feel it’s a mistake to try to dissect comedy. As the saying goes, it’s like dissecting a frog: few people are interested and you kill the frog. (If you enjoy the dissection process, bully for you but please excuse me from the discussion.) However, I will say that I believe a big part of Chaplin’s continued charm is how seriously he took his work and how hard he labored to make the best films possible. Movies were not just a silly diversion to Chaplin, he polished and tweaked and reworked them until they glistened. I think that comes through even a century after their release.

Chaplin’s idea of a pie fight was meant to take the anarchic culture of the Sennett outfit and crank it to eleven. If there was one pie thrown, why not dozens?

A quick note on movie pie fights: they are exceedingly rare. Behind the Screen is sometimes listed as the very first example of one. I am conservative about deeming anything the “first” as so many silent films are lost but it does seem to have a strong claim to the title.

Even during the silent era, “custard pie comedian” was an insult aimed at the broader slapstick practiced on the Sennett lot. You can see examples of this in Show People, in which the main couple try to move up from pie throwing after establishing themselves in knockabout comedy. Of course, this was a simplification as comedians tended to toss around anything they could get their mitts on: flour, milk, seltzer, mud, jam, etc.

The problem is that pies entered the public imagination as THE icon of all silent comedy and now we are in a pickle. Yes, some pies were tossed and, yes, there were a couple of silent pie fights (Laurel and Hardy engaged in one) but silent comedy had numerous sub-genres that featured no thrown pastry at all. Pie fights are comparatively expensive and, frankly, they’re dangerous. Performers can choke or smother under the sticky filling, which is nobody’s idea of a good time. Is it any wonder that such fights were a rarity?

Dismissing silent comedy as being all Keystone Cops and pie fights is both simplistic and wrong, especially since one of the most famous pie fights of the silent era was an intentional exaggeration!

The Dance of the Cleaning Ladies

The documentary Unknown Chaplin showcases the comedian’s outtakes from his Mutual days and reveals that he made his movies up as he went along and that he rehearsed on film. He also shot enormous amounts of material, fretting over and perfecting gags only to cut them from the final product. The outtakes show that Chaplin’s trash was often a good deal funnier than the best work of his rivals. In fact, two of the best jokes in Behind the Screen never made it into the final film.

The comedy company in the film shares studio space with a historical drama outfit and the overlap between the two productions creates much of the short’s humor. Chaplin shot and reshot and reshot a joke involving his character walking past an executioner and almost having his toes chopped off. The routine was accomplished by walking backwards and then reversing the film, a fairly common technique that often looks strange and awkward. This is where Chaplin’s extreme grace and perfect control over his body pays off. He is able to replicate his famous Little Tramp walk in reverse and the only clue that he is cheating is a mistimed wobble in one of the props.

In 1915, Mack Sennett introduced Bathing Beauties to his pictures and the outtakes reveal Chaplin’s take on this development. After witnessing a group of toga-clad beauties flitting about, Chaplin gathers the cleaning ladies of the studio and leads an impromptu dance. The routine obviously did not land the way Chaplin intended because it also ended up on the cutting room floor. A darn shame as I think it is the funniest gag in the whole picture.

Behind the Screen is not Chaplin’s best film and it lacks the depth of some of his other work at Mutual but it is a great deal of fun to watch. Behind-the-scenes movies are always a kick because we get to peek behind the curtain and see the magicians at work. Practices that were once standard in the movies (mood musicians, for example) are now an intriguing echo of the past.

Behind the Screen is a good choice for silent newcomers and would ideally be paired with a Sennett comedy for the purpose of comparison. (I recommend Mabel’s Dramatic Career for a take on the same basic tale.) Chaplin’s film is light and silly but quite enjoyable.

Behind the Screen is in the public domain and there are numerous editions of Chaplin’s Mutual comedies available in bargain formats but you most definitely get what you pay for. If you want the prettiest prints and the best music, go for Flicker Alley’s Chaplin Mutual Comedies box set, which includes both DVD and Bluray discs. You’ll see these fine films looking better than they have in almost a century. Oh, and Unknown Chaplin is available on DVD as well and it is highly recommended.