We’re back to cooking! It’s been a while so here is a refresher on the project: I am attempting to cook my way through the 1929 Photoplay Cookbook (recipes of the stars!) and I am sharing the results. You can catch up on all my previous attempts here.

This time, I will be preparing a luncheon dish from one of many starlets who glowed brightly for a time and then faded away. Alice White is probably best remembered as Dorothy in the original version of Gentlemen Prefer Blondes. (Alas, that film is lost.) She was a hotsy-totsy number who made pictures with names like Show Girl, Broadway Babies and The Naughty Flirt. Oo-la-la!

While Alice White’s silent films are hard to come by, you can see her in red hot action in Picture Snatcher, James Cagney’s pre-Code tabloid journalism film.

So, we know that Alice White was a spicy number on the silver screen. Will she be equally enticing in the kitchen?

I’m gonna say that’s probably a no. I found this recipe to be a bit scattered. First it tells me to drain the peas and add the cream and then it acts like the peas and the sauce are separate. Since I didn’t want to sauce to get watery from pea juice (yum yum), I decided to prepare the veg and sauce individually. I used approximately one tablespoon of unsalted butter and one tablespoon of white flour in the sauce and made the whole thing in the standard white sauce manner. (Melt butter with flour, slowly add the cream, gently thicken, season to taste.)

Here is my poor, innocent slice of toast:

And here it is be-pead: 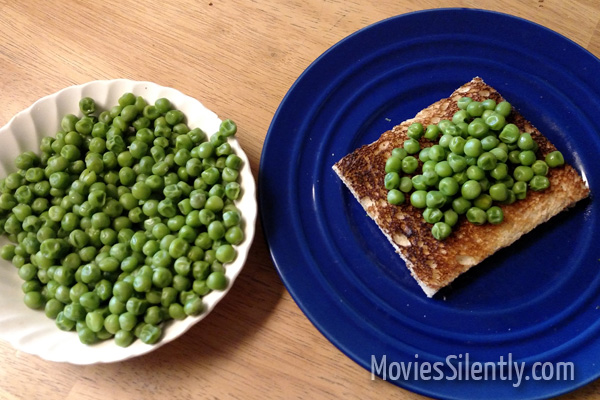 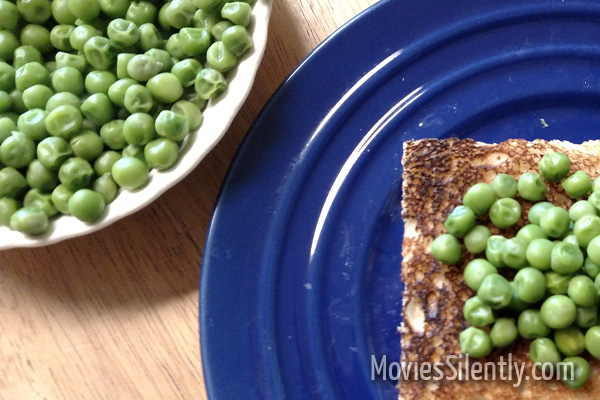 Okay, is everyone ready for the saucing? Are you sure? I’m only going to issue one warning, you know.

(There’s still time to save yourself.)

TA-DA! Is it a food or is it something that a Farscape alien upchucked? I think we need another angle! 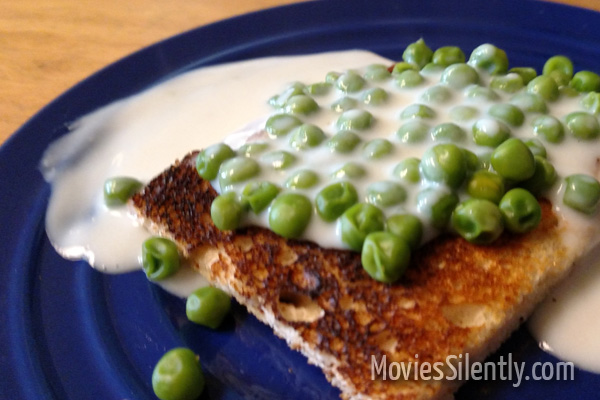 GAAAAAH! And, yes, I did eat this.

Score: 2 out of 5. It actually tastes better than it looks but that’s not saying much. It’s bland white sauce with peas, nothing more and nothing less. I’m not really sure what the point of all this is as I would rather have eaten the peas with butter and had the toast on the side. It seems like a lot of wasted effort.

Attractive dish? Feh! What were they smoking at Photoplay? Don’t answer that!

Verdict: When you think of things that can go on toast, I’ll wager that peas are not at the top of the list. I do like my little savory sandwiches but I will usually go for something more in the cucumber and dill line. This dish is weird, ugly and not very flavorful.

I like that we are supposed to appreciate this as vegetarian fare. With food like this, it’s no wonder Americans went gung-ho for mmmmmmmeat! Vegetarian cuisine can be amazing, both satisfying and flavorful. This dish isn’t going to win any converts.