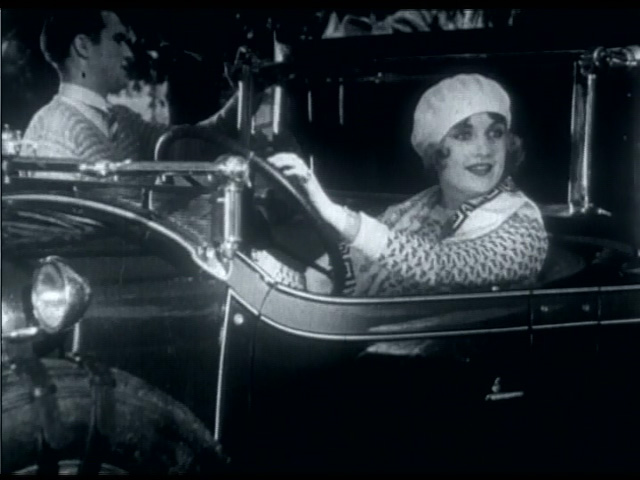 Carole Lombard shows her stuff in this late-silent era comedy. She is the titular vamp who is determined to steal her gal pal’s man. Of course, the gal pal has other ideas. Notable for some splendid twenties fashions and a climactic color sequence.

College films were big business in the twenties and equally big names were ready to take a stab at the genre. Buster Keaton, Harold Lloyd, Marion Davies and Richard Barthelmess (just to name a few) all caught the college bug. Never willing to let a trend pass by, Sennett studios also cranked out short films with a collegiate theme.

Once the top comedy studio, the Sennett banner had fallen on hard times by the end of the silent era. Like his mentor, D.W. Griffith, Sennett viewed himself as a star-maker and saw no reason to shell out a lot of cash for big names when there were cheaper performers waiting in the wings.

This attitude (along with other poor business decisions and a refusal to keep up with the times) was really responsible for Sennett’s downfall. It meant that brilliant comics would get their start with Sennett but would leave the moment they were big enough to be offered a better salary. Charlie Chaplin, Mabel Normand, Gloria Swanson and Carole Lombard all slipped through his fingers. What Sennett failed to realize was that paying five times as much for a star was worth it if their films brought in ten times as much at the box office.

So, Sennett’s movies were in trouble financially but how did they fare from a comedy viewpoint?

As stated before, The Campus Vamp was one of Sennett’s collegiate comedies. It is of special interest to modern viewers because it features a very young Carole Lombard as the titular vamp. Plus, the finale of the film (a beach baseball game) was filmed in color.

The formula for The Campus Vamp was the same one that Sennett had been practicing for nearly two decades: The plot is a skeleton to hang the gags on. Sally (Sally Eilers) is a good girl and a brainy one. She has her eye on Matty (Matty Kemp), whom she is tutoring. However, wild Carole (Carole Lombard) also wants Matty and she is far more assertive. Sally must find a way to win her man back.

At this point, I am wondering why she must do that. I mean, Matty made a pass at Sally but immediately dumped her for Carole. A boyfriend with a wandering eye? No, thank you!

As I said before, the plot is thin. Unfortunately, the comedy does not make up for it. While a few of the gags work (Dora clonking Sally and Matty’s heads together for a very awkward kiss), most of them rely too heavily on mugging and slapstick.

So, does the film have any redeeming qualities? Fortunately, the answer is yes.

Mack Sennett loved his bathing girls and they had been a fixture of his comedies for years. However, I think that the ladies have more to recommend them than just sex appeal. The leering camera unintentionally captured shots of adorable twenties hair, swimsuits and accessories.

(The climactic beach baseball game was shot in color but the only version available on DVD is all in black and white.)

The dance scene is even better. Fringe, beading and flounces galore! If you want ideas for a twenties costume or reproduction this scene should give you plenty of ideas.

Matty Kemp is nondescript as the object of everyone’s affection. Sally Eilers fares a little better but she does not really have anything that makes her unique. Eilers is probably best remembered for her role in Frank Borage’s 1930 pre-Code drama Bad Girl. She never really hit true stardom and her career sputtered by the end of the decade.

Of course, I dare say that most people will watch The Campus Vamp for one reason and that reason is Carole Lombard. I am happy to report that even at this young age, her madcap sensibilities are quite intact. She dances, leaps, jumps and laughs. She is a sparkling presence. You can see at once why Matty cannot give Sally the time of day while Carole is around.

It’s worth noting that Matty finally does choose Sally– but only because the seat of Carole’s swimsuit is chewed off by a crab and she is forced to retreat. Yes, I realize that is a very odd sentence to type. Sennett comedies could verge into the surreal.

I have a feeling, though, that Matty and Sally have not seen the last of Carole. Shorn seat or no shorn seat, she’s ten times as much fun as anyone else in this short.

The Campus Vamp was released on DVD as an extra with Nothing Sacred. It is also available on DVD from Alpha but the print is not great and it does not have the final color sequence.