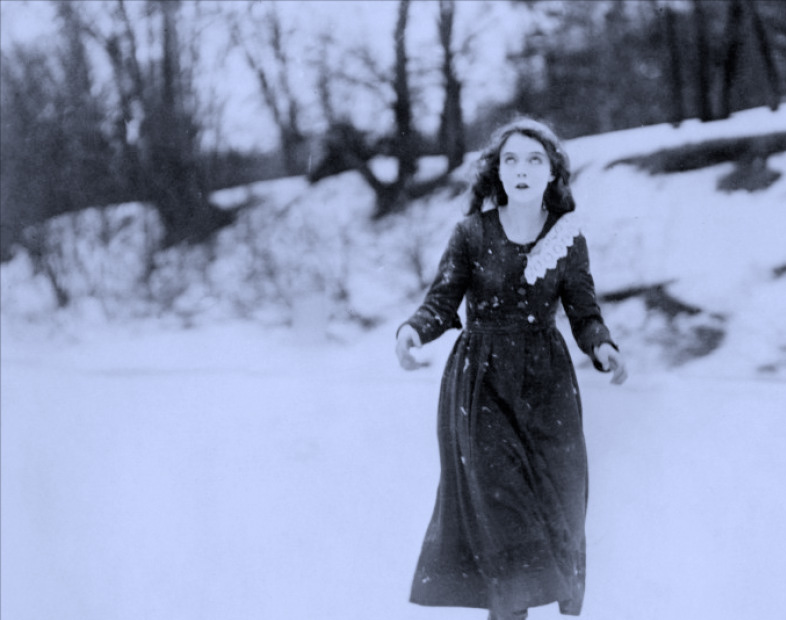 Director D.W. Griffith dives back into country melodrama with this adaptation of a hoary stage smash. Lillian Gish plays Anna, a country girl seduced and abandoned by a rich cad. The resulting baby dies and Anna is alone in the world. She meets the kindly Bartlett family and it seems that her life is taking a turn for the better… that is until her past is exposed.

Home Media Availability: Released on DVD and Blu-ray and via streaming.

Corn on the Cob

The story of making Way Down East is pure Hollywood. Director D.W. Griffith, in need of a hit, purchased the rights to a creaky, corny melodrama at a cost that was more than the total budget of his hit film, The Birth of a Nation.

Everyone, including his leading lady, Lillian Gish, was certain that Griffith was making a massive mistake. That is, until they saw the box office returns!

Griffith was in his element. His years of creating tight, entertaining melodramas for Biograph made him ideally suited for bringing Way Down East to the big screen. In his hands, the melodrama is not only palatable, it is downright compelling.

Lillian Gish plays Anna, a simple country girl who goes to stay with her relatives in the city. Once there, she meets Lennox Sanderson (Lowell Sherman), a womanizer of the first water. Sanderson wants Anna but she is too good a girl to be had without a ring on her finger. So, Sanderson hires friends to impersonate a minister and witnesses and stages a mock marriage.

Anna is delighted by her marriage and even more delighted when she discovers that she is to have Sanderson’s child. At that point, he drops his bombshell and Anna faces the cruel world alone as an unwed mother. The child dies soon after birth and Anna wanders the countryside seeking work. She finally finds it at the farm of the Bartletts. Squire Bartlett (Burr McIntosh, who had worked with Gish when she was a child actress) and Mother Bartlett (Kate Bruce) take Anna in and treat her as one of the family. Their son, David (Richard Barthelmess) falls head over heels for her.

But there are complications. This is a melodrama, after all. David’s parents have intended for him to marry his cousin Kate (Mary Hay, Barthelmess’s real life wife). And she is being pursued by the eccentric but good-hearted professor (Creighton Hale).

But there is one more piece in the puzzle.

Kate is the newest interest of Squire Bartlett’s neighbor, Lennox Sanderson. What’s Anna to do? Will she risk exposure to save Kate? Will Sanderson tell her tale out of spite? Will the puritanical Squire Bartlett throw Anna out when he learns the truth? Well, like I said, this is a melodrama.

I am a bit of a Griffith heretic in that I really do not care for either Birth of a Nation (couldn’t get past the intense racism) or Intolerance (groundbreaking but pretentious in the extreme). Griffith’s best stuff, for my money, comes when he is in pot-boiler mode. I love his old Biograph short features but most of his features leave me cold.

It should come as no surprise, then, that Way Down East is my favorite Griffith feature. Lillian Gish was never lovelier, with Griffith making her look like nothing less than a renaissance madonna in most scenes. In fact, great care is given to show Miss Gish in an overtly religious light. Richard Barthelmess, for his part, was never more boyish, Kate Bruce never more maternal. The famous climax, in which Miss Gish is thrust out into a blizzard is one of the most compelling and enduring images of silent film. This movie has it all!

That’s not to say that it doesn’t have flaws. For one thing, Griffith decided to retain the cornball humor from the original play. The eccentric professor’s pursuit of the flirty Kate would have been sufficient comedy relief but we are forced to endure a parade of hicks being so country that you just want to throw something at the screen. Comedy relief should not induce pain.

In general, the whole down-on-the-farm routine is spread a bit thick. As Carl Sandburg brought out in his review of the film, “The barn dance is too terribly and grandly barney and dancey. Seldom, if ever, have the American farmers gathered in so great and gay a haymow affair as is here staged. No farmers have time or imagination for such splediferous gayety among the cows and hay in the wintertime.”

However, to counteract this barney-dancey vibe, we have the talents of the afore mentioned leads. There really is no way to praise Gish and Barthelmess enough. Lillian Gish was stuck playing yet another suffering saint but managed to infuse Anna with enough moxie and inner strength that the character is much more fascinating than the usual melodrama heroine. Her tasteful handling of her role as an unwed mother would hold her in good stead when, in 1926, she played the most famous literary single mother of them all: Hester Prynne.

Barthelmess was one of Gish’s best leading men. He had enough screen presence to stand up to Gish’s powerful performances (Lillian Gish tended to blow lesser actors off the screen). He is all youthful country charm, a role he would explore in greater depth in Tol’able David.

Finally, there is that blizzard. Griffith took his crew on location and waited for an actual blizzard to start. The scenes of Lillian Gish staggering around snow blind and half-frozen are quite real. The frost on her face, the icicles on her eyelashes… The whole scene surpasses the finest 3D CG blizzards in modern films because it is real and we know that it is real.

The ensuing race to the rescue across the broken ice is a combination of real footage of a frozen river and some pretty convincing sets. It is a real heart-stopper in the finest melodramatic tradition. So, if you are in the mood for a real barnstormer of a melodrama, the finest quality of course, then Way Down East is the film for you. It’s not art, not really. Just some splendidly crafted entertainment that will transport you to another time.

Way Down East is widely available on DVD and Blu-ray (I recommend the Kino edition with the new score) and for online streaming.